This is a very historic park, but is suffering from terrible neglect.  Please help by joining: Petition to the Mayor of London to Save Bethnal Green Gardens

The history, although as it states here 1678, there are records stating 1667, when the land was purchased.  Whatever the situation, this area is arguably the second oldest gardens in London after Finsbury Circus.  In 1895 the gardens were made ornamental.

The Green and Poor’s Land is the area of open land now occupied by Bethnal Green Library, the V&A Museum of Childhood and St John’s Church, designed by John Soane. In Stow’s Survey of London (1598) the hamlet was called Blethenal Green. It was one of the hamlets included in the Manor of Stepney and Hackney. Hackney later became separated.

In 1678 the owners of houses surrounding the Green purchased the land to save it from being built on and in 1690 the land was conveyed to a trust under which it was to be kept open and rent from it used for the benefit of poor people living in the vicinity. From that date, the trust has administered the land and its minute books are kept in the London Metropolitan Archives.

Bethnal House, or Kirby’s Castle, was the principal house on the Green. One of its owners was Sir Hugh Platt (1552–1608), author of books on gardening and practical science. Under its next owner it was visited by Samuel Pepys.

In 1727 it was leased to Matthew Wright and for almost two centuries it was an asylum. Its two most distinguished inmates were Alexander Cruden, compiler of the Concordance to the Bible, and the poet Christopher Smart. Cruden recorded his experience in The London Citizen Grievously Injured (1739) and Smart’s stay there is recorded by his daughter. Records of the asylum are kept in the annual reports of the Commissioner in Lunacy. Even today, the park where the library stands is known locally as “Barmy Park”.

The original mansion, the White House, was supplemented by other buildings. In 1891 the Trust lost the use of Poor’s Land to the London County Council. The asylum reorganised its buildings, demolishing the historic White House and erecting a new block in 1896. This building became the present Bethnal Green Library. A history of Poor’s Land and Bethnal House is included in The Green, written by A.J. Robinson and D.H.B. Chesshyre.

The north end of the Green is associated with the Natt family. During the 18th century they owned many of its houses. Netteswell House is the residence of the curator of the Bethnal Green Museum. It is almost certainly named after the village of Netteswell, near Harlow, whose rector was the Rev. Anthony Natt. A few of its houses have become University settlements. In Victoria Park Square, on the east side of the Green, No. 18 has a Tudor well in its cellar. 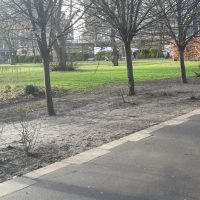 Much more the overall attention to this area, potential hazards, waiting for an accident:

Flower beds not attended too:

Generally a malaise, it would be thought that such an important area, not only to local history , but to London’s social history should be kept in such a poor state. 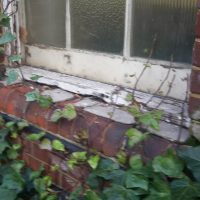 The library grade ll listed, having being informed by a leading figure in the library services of the borough, assured me that the roof leaks, much more, after an extensive refit, why the structure of the building was not attended too.  The window frames are visibly rotten:

The belief is that a local authority would care greatly for its history.  I remember Mayor Biggs stating at the re-opening that such an historic building should not be neglected.

Petition to the Mayor of London to Save Bethnal Green Gardens