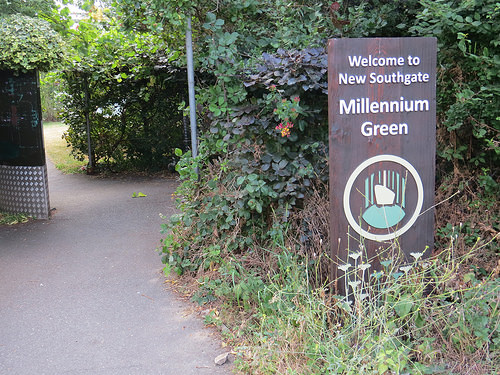 Please tell the Network about our experiences with vandalism and theft of trees and shrubs:
The New Southgate Millennium Green is one of 245 volunteer-run greenspaces throughout England, set up to celebrate the Turn of the Millennium in 2000.  We are a small park in an urban area and we had theft and vandalism of our trees and shrubs right from the start.  Of ten Golden Ash trees planted in 2000, only three were left three years later, the rest all vandalised repeatedly until they died.  In the first year, many of our newly planted small shrubs were stolen and I know that is a familiar story, especially in urban parks.  SO we set out to change things and it DOES make a difference.
1.  In stead of planting things in public view, we tend to be more discrete, planting during the week, when there is no-one around.  This seems a shame, but at a public event we had a Yew Tree stolen before it was even planted!  At one public event, all the flowers we planted when the local children were there were pulled up and thrown around later, all those we planted without the children seeing us were left alone.
2.  We try to make the shrubs and trees look as if they have always been there, so we ignore standard practice-  all the soil we dig up goes on a sheet or in a barrow, so you don’t get the usual planting residue afterwards; instead of removing a circle of turf, we cut a cross in the turf, peal it back, dig and plant, then put the turf back.  We even pile up leaves or cut grass around all the neighbouring trees so they all look the same.  We REMOVE ALL LABELS, so they don’t look new and are less useful to plant or sell on eBay.
The only plants we have had stolen in 15 years are the shrubs planted by a contractor last year, who left the labels on. 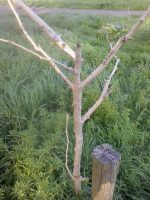 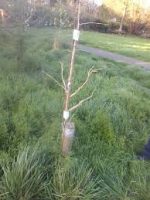 One thought on “Dealing with Vandalism & Theft”

Fields in Trust – how to protect open spaces

Who can guess where our next monthly walk will be?Join #SuttonBefrienders walking group for a circular walk on Wimbledon Common on Sat 28th May - see https://vcsutton.org.uk/assets/documents/wimbledon-common-circular-walk for details - easy gentle pace walks, with friendly faces, open to all #NationalWalkingMonth #Wombles

Will you be in the King George's Park area this week?

Why not come down and see the Shire Horses at work, helping us to make biodiversity improvements for Wandsworth? 🌱🐴

These projects are supported by The Mayor of London, in partnership with the London Wildlife Trust.

One of many activities we undertake is supporting #London #park & other spaces friends groups.

@RedLionSquare in #holborn #camden is one.

Sat, 11 June there is a #gardening session. Why not get in touch & support their #activities?

But did you know a number of #London #parks like #Westham park in #Newham have had a #vegetable #garden since 2012? Pic below.

Why not see if your local #greenspace does? https://www.goparks.london/boroughs