The Council has lost it’s legal appeal on this long running planning application.

For those of you that haven’t been following the issue, it centres on what can legally happen in that part of Neal’s Lodge not currently occupied by the The Skylark Café.

The Council initially awarded a contract to a commercially operated private chain of fee paying day care centres. This was appealed last year in a Judicial Review (JR) brought by a private resident, Sandy Muir, on the grounds that the use of common land for a commercial venture which had exclusive use of the premises, fell outside the powers of the Council under the legislation governing the use of the Common. The Council lost the JR with the detailed judgement available here and a more digestible summary In The Times: 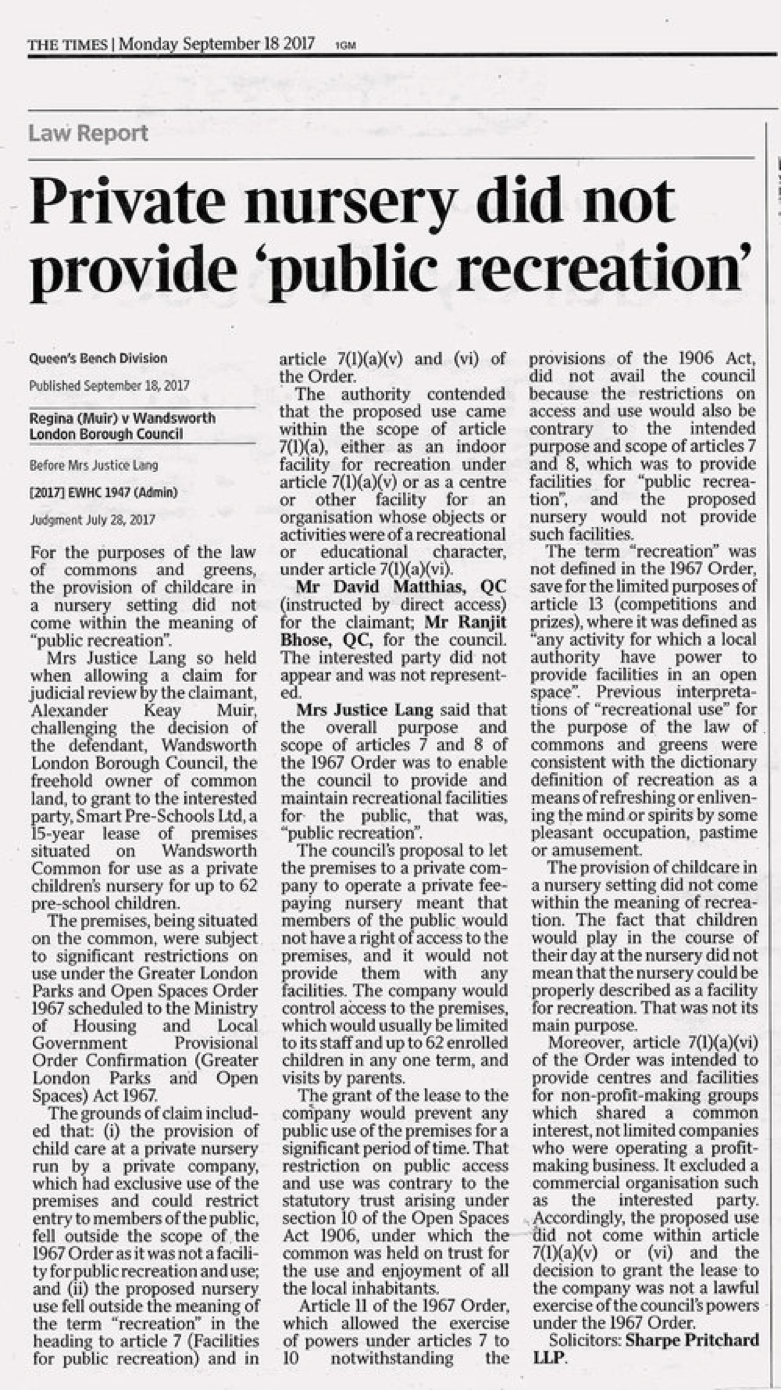 “For the purposes of the law of commons and greens, the provision of childcare in a nursery setting did not come within the meaning of “public recreation”

“Mrs Justice Lang so held when allowing a claim for judicial by the claimant, Alexander Keay Muir, challenging the decision of the defendant, Wandsworth London Borough Council , the freehold owner of common land, to grant the interested party, Smart Pre-Schools Ltd, a 15 year lease of the premises situated on Wandsworth Common for use as a private children’s nursery for up to 62 pre-school children.”

The appeal court has now upheld that original judgement. In brief, the court found that the Council should provide and maintain recreational facilities for ‘the public’ whereas the lease to the private nursery would restrict public access and be contrary to the statutory provision under which the Common is held in trust for the use and enjoyment of local inhabitants. The High Court judgement also laid down an important principle that the Common is a public resource that must be managed in the interests of its users, and not as a financial asset for the Council. The 12-page appeal court judgement is here. The focus should now turn to what should happen to the premises

End of a good evenings work watering thirsty young trees in drought stricken Meath Gardens. THANK YOU to @GGTowerHamlets and our volunteers 🙏🙏🙏

Our friends at @FieldsInTrust are searching for the UK's Favourite #Parks and you can vote for a green space that is special to you visit: https://www.fieldsintrust.org/favourite-parks/nominations

Your nearest staked tree is your #treefriend

Looking for alternative rainwater collection systems for Wray Park any suggestions? Worth noting we have no building for water run off @parks_forum @GreenFlagAward @LDNgreenspaces @IslingtonBC

Please befriend your nearest staked tree and water it using your bath, shower or washing up water

We can use grey water …