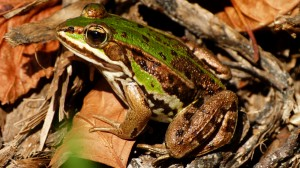 In November 2016 FARRG announced an addition to their park – a new pond! “It may look a bit like a churned up mess but this fenced enclosure protects an exciting new conservation project.”

Froglife www.froglife.org (‘leaping forward for reptiles and amphibians’) is a national wildlife charity committed to protecting native amphibians and reptiles including frogs, toads, newts, snakes and lizards. They maintain existing ponds and create new habitats to protect species of frogs and toads which are threatened with extinction, such as the pool frog.

The pond has an education role

A “dipping platform” has been installed at the deepest end to allow children to carry out field studies. There are also interpretation boards made from sustainable Douglas Fir and Birch ply lecterns.

The area around the pond and the mounds created from the excavated earth were sown with grass and wild flower seeds. The native flowers in Spring and Summer will make the mounds pleasant places to sit and relax.

The Friends of Albert Road Rec in Haringey have a great website at www.farrg.org.uk where you can find out more.