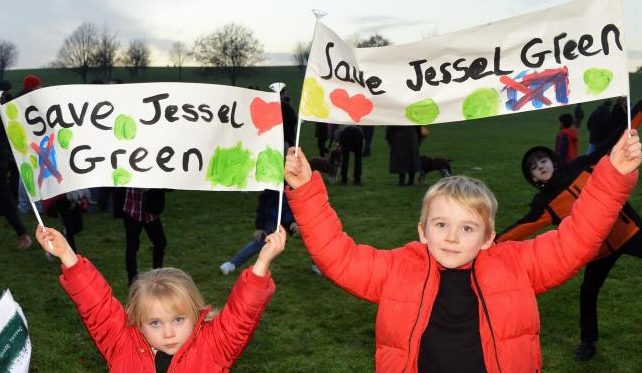 campaign to save Jessel Green park from being developed in to 154 homes:

Extract from this Guardian article by Anne Slater on the 30th December:

“I feel embarrassed to be called a councillor, as all my hard work and passion has been tainted by councillors who made a terrible decision.”

That was the poignant message from Cllr Leon Girling, who sits on Epping Forest District Council and refuses to support its decision to build 154 homes on Jessel Green.

The Guardian’s campaign, with residents of the Debden Park Estate, was launched last week and is taking off.

Voting on the plan took place two weeks ago – just six days after it was officially published.

But although building over Jessel Green has been on the cards for five years, bosses now say there is “not enough time” to make changes.

“It was like holding a gun to our heads,” Cllr Girling added. “There is no way Jessel Green should be on the plan.

“That document was bigger than any JRR Tolkein book, 90 per cent of councillors work for a living so there’s no way they’d have been able to read it all in time.

“It won’t cause a headache to take out, landowners have put forward suitable sites for housing. Why didn’t they have a back up plan?

“We had a lot of Local Plan workshops over the years but they were all for nothing.”