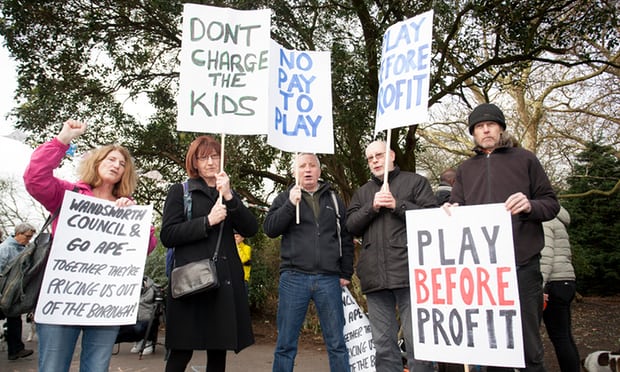 In our response to the Mayors Draft Environmental Strategy

London’s 3,000 public green spaces need statutory recognition and effective protection by all tiers of Government. This needs to be backed by adequate public funding (eg from infrastructure budgets and taxation), good management to green flag standard, and active community involvement. This is not only to address the current deepening and disastrous underfunding crisis but also to fulfil the full potential and benefits of our green spaces for nature and for London’s communities. The coming declaration of London as the world’s first National Park City is an unparalleled opportunity and must act as a driver to ensure that real action to improve policies and funding is taken now.

from a letter recently in the Guardian:

from a University of west of England, finalist case study

“UK public parks do not attract statutory funding, so are vulnerable to the cuts currently being implemented by local authorities, including those in Bristol. UK-wide, public parks and green spaces are in decline; there is a recognised ‘spiral of decline’ which leads to public spaces being used less and less & then inevitably closed to the public, sold off on the basis that they are ‘little used,’ (Area Green Space Plan, Bristol City Council: 2010) , and built on;…”

from  Horticulture Weekly in September 2016, by Sarah Cosgrove

“Survey finds 75% want parks to be statutory duty… Campaign group We Own It commissioned Survation to conduct the survey of 1,013 adults over 18 …the survey was weighted to be as representative as possible of the UK population as a whole, using age, gender, region, household income, 2015 General Election vote and the 2016 EU Referendum vote…

The 2016 Heritage Lottery Fund State of UK Public Parks report found that 59 per cent of local authorities were considering disposing or transferring management or ownership of green spaces in the next three years, up from 45 per cent in 2013 when the last HLF research was conducted.”