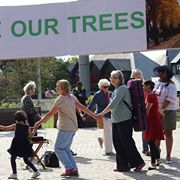 A third of a town centre park, including 81 mature lime trees, are still condemned by development scheme, despite the council’s development partner pulling out of the “transformational project”.  This plan was put forward for Walthamstow town centre, by the Housing portfolio holder at Waltham Forest Council, Cllr Simon Miller.

Save Our Square E17 explain that the scheme will build on 32% of the town centre’s park, cutting down the mature trees (to be replaced by saplings) just so that they do not obstruct the view of the new building.  There will also be a new shopping mall and 800 houses (52 of which are affordable at either 40% or 80% commercial rents) in 29-storey blocks.

One local commented “They only have outline permission for the towers… this just shows what problems they have trying to get such a rubbish scheme like this to fly”, and “Capital & Regional and Mount Anvil have both refused to comment on the issue.”

“the mall development just one part of the pipeline we are putting in place to deliver social and affordable housing for our residents”, says Cllr. Clare Coghill, Leader of the Council.

“High streets in 2018 are a tale of lost shops with thousands of jobs at risk. Ironically, the owners of the Walthamstow Mall, Capital & Regional, recently released figures for its predictions of how much the high street bloodbath is set to cost it by the end of the year – estimates show that full-year rental income will be down £1.2million.”

“Additionally, research shows year-on-year retail footfall fell 6% in March 2018, Greater London saw the most rapid fall in footfall of 7.5% and high streets like Walthamstow experienced the most drastic decline of all retail destinations of 8.6%. With such economic woe it seems Capital & Regional has lost touch with reality.”

“Both Cllr Simon Miller and Capital & Regional are also delusional if they think swallowing up two thirds of public space, ripping out 81 mature Lime trees and moving the children’s playground next to the third busiest bus station in London is a “transformational project”.

“We are committed to working with local groups to deter future developers from stealing our public space from us.” O’Rourke concluded.

Our earlier article about the granting of the outline planning permission, is here.

One thought on “Park and 81 mature trees still doomed, despite builder pulling out”