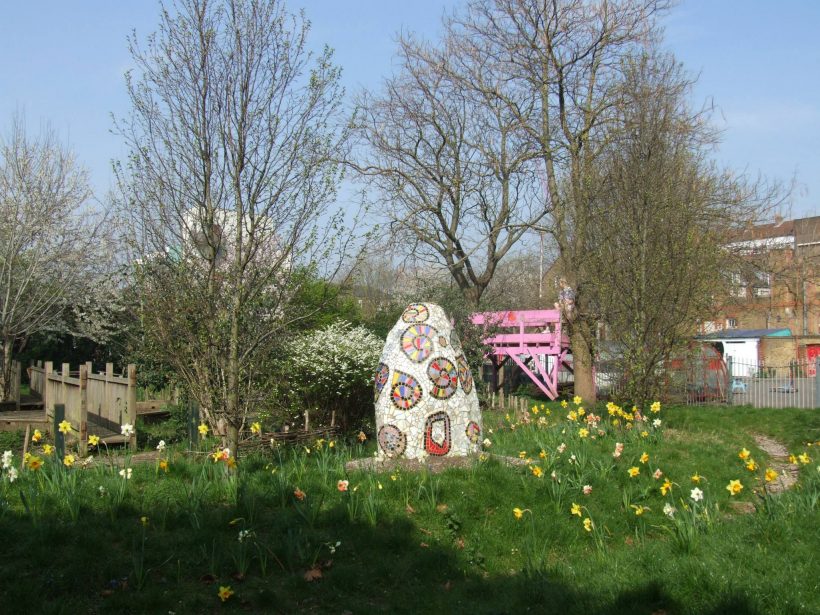 The clash has been the latest hurdle campaigners have faced in their decade-long crusade to stop the demolition of Reginald House and Old Tidemill Garden by Lewisham Council.

The local authority have granted planning permission to build new homes on Frankham Street, which has also been known as the Tidemill site development.

The scheme will provide “much-needed new social rented homes” for the area, the council said.

The council have appointed Peabody to build these 209 homes, with 117 of these being marked at social rent level. A spokesman for Peabody added that green space will also be accessible to everyone all the time.

Members of the Save Reginald and Save Tidemill Garden group said it will be removing a key community asset in the area, however.

Local resident and campaigner Harriet Vickers said the garden is a “community space and it’s always been accessible to everyone.”

She said: “Anyone can come and put on events there, we’ve had gigs there, body percussion performances there and lots of other events. It’s one of the only spaces that does not feel segregated by class, or race or any other difference in the community.”

Ms Vickers added that many in the area speak about how the area benefits their mental health, including a resident who is a former solider, living with post-traumatic stress disorder.

“There’s a park up the road which the council says is a good example of what a space should be about, but it is not a space where we would gather, it just feels cold compared to the garden,” she said.

“We’re not opposed to putting different ideas forward. We want this land to be developed, it’s a big patch of land. We’ve always said develop it, build homes, but just do it around the garden.”

Lewisham Councillor Paul Bell, Cabinet Member for Housing said as part of the planning application conditions, Peabody will work with groups in decision making about the new green space.

Since August 29, the garden has been occupied by campaigners in resistance to the council’s plans to build on the area. This has included some staying overnight in the garden in tents and other members of the community tending to it.

A spokesman for the Metropolitan Police said officers attended on Monday to “prevent a breach of the peace while local authority enforcement officers effected an eviction”.

He added: “A number of protesters refused to leave and officers remained on site. One man was arrested at the scene and released with no further action”.

Ms Vickers said: “They surrounded the site and came in from different directions. It was completely like a raid, they just dragged people out. One woman climbed up a tree and was in it for seven hours, she just kept climbing out.

“We were all quite worried, it was scary.”

Cllr Bell said: “We gave the protestors notice to vacate the site in August.

“Unfortunately we had to take enforcement action after they refused to leave.

“We ask them to respect the court’s ruling upholding our eviction notice, so that we can move ahead with plans to provide the desperately-needed 800% increase in social housing for those who are waiting for a secure place to call home.”

He added that he “did not believe” the eviction was heavy handed, adding it was a “straight-forward operation”.

He said: “I don’t believe it was heavy handed, but any complaints received we will take seriously and look into.

“No local authority likes to go in [to an area] with bailiffs and officers, and no one wants to remove people from areas they’re occupied in, but we had no choice in this matter.”

In the light of the coronavirus, we are not running our general meetings at City Hall.
Instead, our next meeting on 20th July will be virtual, on Zoom.
Wishing everyone good health at this difficult time, LFGN.

The future of walking in central London: returning to the best of the past – London Living Streets https://londonlivingstreets.com/2020/07/17/the-future-of-walking-in-central-london-returning-to-the-best-of-the-past/

Is litter a social justice issue in London parks? Are some parks better than others when it comes to littering? Or do we just accept it as it is and continue to politely ask people to take their rubbish home? It will be a long time before this debate is binned. @loveleedsparks https://twitter.com/loveleedsparks/status/1310637780511404034

'Parks in deprived areas have seven times more litter than in better off areas. It's a social justice issue'. Some great content in #LeedsBigLitterDebate. Watch it here: https://www.youtube.com/watch?v=af7_mo0XOPM

Celebrating #UKFungusDay with Ranger Michael of the #LondonFungusNetwork where we found this beefsteak mushroom in Larks Wood.