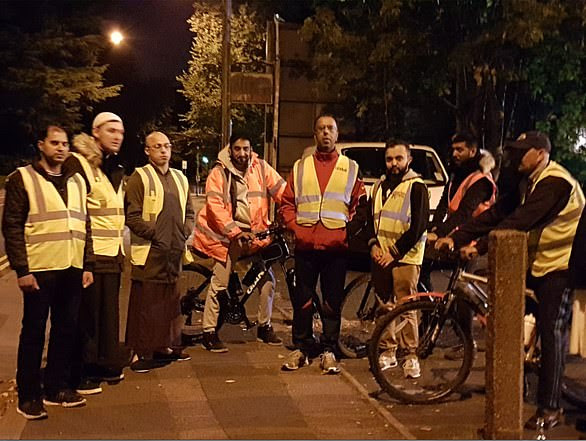 To all Friends groups – please forward to your members…

Please check out this major Sunday paper article below, paying tribute to the thousands of dedicated Friends Groups volunteers throughout the UK. Includes a statement from the NFPGS chair recognising the vital role of Friends groups and calling for proper investment and resources for all the UK’s parks.

Let’s try to keep up the good work and support each other in 2019!

We salute the park saviours! Pruning, picking up litter and even patrolling at night

… how a volunteer army of 300,000 keep open green spaces that have been abandoned by councils

By Michael Powell and Andrew Young For The Mail On Sunday

Published: 30 December 2018Like many of her neighbours, Chrisie Byrne was horrified when she discovered that developers wanted to concrete over her local park. The mother of three was in the midst of restoring the 130-acre Walton Hall Park in Liverpool to its former glory after years of neglect. The council had gone from employing 15 full-time park staff to occasionally mowing the grass. Along with 30 other volunteers, Chrisie spent months painstakingly pruning overgrown bushes, planting shrubs, clearing walkways, replacing benches and picking up litter.

Despite their efforts, the council entered talks to turn the space into a new stadium for Everton Football Club, and build 1,000 homes, shops, a 150-bedroom hotel, school and police station.

With their hard work under threat, Chrisie’s volunteer group launched an unlikely fightback. ‘For two years, we were busy gardening in the daytime and then waving placards outside council meetings in the evening,’ she says. Their battle against the £300 million development was finally won in May 2016 when the plans were withdrawn. Liverpool mayor Joe Anderson later announced that the park would never be built on.

Chrisie’s team of volunteers has since grown to 547 members and they prune, plant, paint and tidy up seven days a week. ‘We have worked with four junior schools and a high school, getting children interested in gardening and wildlife. When we started the crime rate here was very high but people are taking pride in the area now.’

When volunteers started rejuvenating Walton Hall Park, it had only three benches and 13 bins. Teenagers said they wanted somewhere to sit, so volunteers created seats from trees that needed felling. Now the council is working in partnership with the group, and has supplied 15 new benches and 28 new bins in locations recommended by volunteers. The council has also given the group its own area to grow seeds underpolytunnels before planting them in the park.

Residents in some areas say council cutbacks have turned their parks into prime spots for drug addicts and prostitution. Locals saw this happening to the historic Ward End Park in Birmingham, where a lack of lighting around the main entrance seemed to attract the 20 prostitutes working on the nearby main road. When schools stopped taking their pupils to the 54-acre site, people living nearby took matters into their own hands.

‘It was appalling,’ says Wajid Hussain, 50. ‘This park is a real beauty and the best resource in our community and we saw it being totally abandoned.’  Wajid, along with three others from a local community forum, spoke to police officers and went undercover for six weeks to work out the extent of the problem. They discovered that from Thursday to Sunday, there could be 150 men cruising the streets in cars or on foot looking for prostitutes. Between 20 and 30 male drug users would use the park benches. The place was littered with syringes and used condoms each morning.

At a public meeting, the volunteers decided to begin their own evening patrol four times a week. And it worked. ‘It was so scary that first night,’ recalls local dad and volunteer patroller Ishraq Hussain, above

At a public meeting, the volunteers decided to begin their own evening patrol four times a week. And it worked. ‘It was so scary that first night,’ recalls local dad and volunteer patroller Ishraq Hussain, 29. ‘The drug users were like zombies coming at you out of the dark. We went in threes and used bicycles to cover a wider area.’ Pimps threatened to stab them and throw acid.

Ishraq says: ‘Much of this was of the council’s own making – for example, they closed the only toilet and sold it off to a money transfer business.’ The volunteers have so far given 12,000 hours of time and the number of syringes, condoms and kerb-crawlers has been reduced drastically.

They are among hundreds of thousands of unpaid volunteers across the country working tirelessly to keep parks running as councils allow green spaces to fall into disrepair.

The Mail on Sunday’s Save Our Parks campaign has revealed that one in three parks no longer has any staff on site and three-quarters of councils have cut back on park maintenance in the past two years.

Now we can reveal that the number of park volunteers has rocketed in just two decades – from a few thousand in the 1990s to more than 300,000 today.

Dave Morris, chairman of the National Federation of Parks and Green Spaces, which represents 6,000 park groups, says: ‘Each group has an average of 50 members. The movement has been growing dramatically and friends groups now provide a vital role in saving our parks, but there is only so much volunteers can do. They can never replace proper professional management.

‘Parks are lacking proper investment and urgently need resources because we are facing another crisis and period of decline after a similar thing happened in the 1990s. It’s a difficult time for groups but The Mail on Sunday’s campaign is helping to keep up morale.’

Cash-strapped councils are keen for volunteers to step in as it means they do not have to spend as much on maintaining spaces. Brighton and Hove Council has mobilised an army of 100 volunteers to help pick up litter.

In London, 15,000 people planted 80,000 trees recently as part of a bid to transform the capital into a National Park City.

Our park is blossoming after years of neglect

Volunteers transformed Longsight Park in Bolton after years of neglect. Since its launch in 2014, the Friends of Longsight Park, chaired by GP Jane Wilcock, has put in new flowerbeds, plants 300 daffodil bulbs each autumn, cut back overgrown areas, cleared paths, repaired broken benches and started a woodland trail.

Jane believes the involvement of volunteers spurred on Bolton Council to spend £60,000 on improving drainage in the park and repairing paths. ‘I was shocked by the park a few years ago,’ she says. ‘All of the paths were muddy and overgrown and it was impossible to go on them if you were in a wheelchair. ‘Now everybody says the park is looking so much better and it is being used far more. The health benefits of socialising and exercising are enormous, particularly once people get older and more frail.’

Dave Morris has spearheaded the transformation of his own local park in Tottenham, North London. The former postman, 64, says: ‘About 17 years ago, the Lordship Recreation Ground had gone into serious decline due to cuts. Flowerbeds had been removed and buildings were semi-derelict. Staff had been withdrawn and as a result anti-social behaviour had increased, creating a vicious circle with fewer people using it because it was not an attractive place.’

After setting up the Friends of Lordship Recreation Ground, he helped bring in millions of pounds in grants to spruce up the lake and paths, create nesting areas for ducks, and install picnic tables. Then overgrown trees and bushes were cut back, woodchip paths were laid, and glades for wild flowers were created. The park is now used by 900,000 people a year compared to 350,000 a decade ago. Dave says: ‘For years I have worked two or three days a week in the park and it has all been worth it.’Families step in to rescue play area after dangerous equipment is dismantled

When it was built in 2002 as part of a new housing development, The Orchard playground in Upper Weston, Bath, was the beating heart of the local community.

As part of its deal with Bath and North East Somerset Council, the developer maintained the play area for ten years before it then became the responsibility of the local authority.

Parents and children at The Orchard after its revamp.

But in 2012, despite increasingly desperate pleas from the community, the council refused to take on the park because of budget cuts and, unsurprisingly, the site soon began to fall into disrepair. After five years of neglect, health and safety officers dismantled the site last year, deeming it too dangerous.

But community leaders were undeterred and launched a campaign to restore their beloved playground. A local organisation, Bath Recreation Ltd, stepped in to offer support and community efforts helped raise £2,500 towards the new playground, which opened in the summer.

Rachel Jarai, who was involved in the fundraising campaign, said: ‘This outdoor space is invaluable to young families. My kids are older now, but I remember well the time when a turn on the swings was a highlight of their day, and we made many friends there.’

The Government claims it is doing enough to protect green spaces and has resisted The Mail on Sunday’s call to force councils to guarantee funding for green spaces. Whitehall officials were forced to respond to our demands after almost 17,000 people signed an online petition.

We asked readers to support our aims, and our manifesto has also won the backing of a host of stars including TV gardener Alan Titchmarsh, Olympic heroes Sebastian Coe and Jess Ennis-Hill, and Good Morning Britain hosts Piers Morgan and Susanna Reid.

If the petition secures 100,000 signatures, our demands will be debated in Parliament.

In response to the initial wave of support, the Government said it ‘believes decisions about the allocation of resources should sit with local authorities’.